Call Or Text Us Apply Today

Hairstyles are a fun and diverse way for people to express themselves today, but that wasn’t always the case. Styling hair was generally a thing for men before the 1920’s until women started exploring ways to explore and style their hair. Fast forward to a hundred years later and you have resources like Instagram or Pinterest where people can daydream and experiment with any hairstyle imaginable! We’ve laid out the journey it took to get to modern hairstyles, and how things have changed along the way.

The 1920s is when exploration into the world of women’s hairstyling really began. Before this time, women would often have their hair maintained at home or with the help of trusted friends. Barbershops were catered towards men’s grooming needs, and women didn’t have local salons they could enjoy. During this time, women began to frequent barbershops to get their hair cut and styled. This was seen by many as controversial, because it was considered rebellious for women to make themselves look more like men.

The hairstyle that swept women’s fashion in the 20s was the off-the-neck style bob. Women everywhere were cutting their long locks of hair in favor of short, wavy curls that seldom extended below the chin. The bob cuts were often parted off to the side or down the middle. Women who didn’t want to cut their lengthy locks even opted for faux bobs and high buns to keep the appearance without sacrificing the hair. 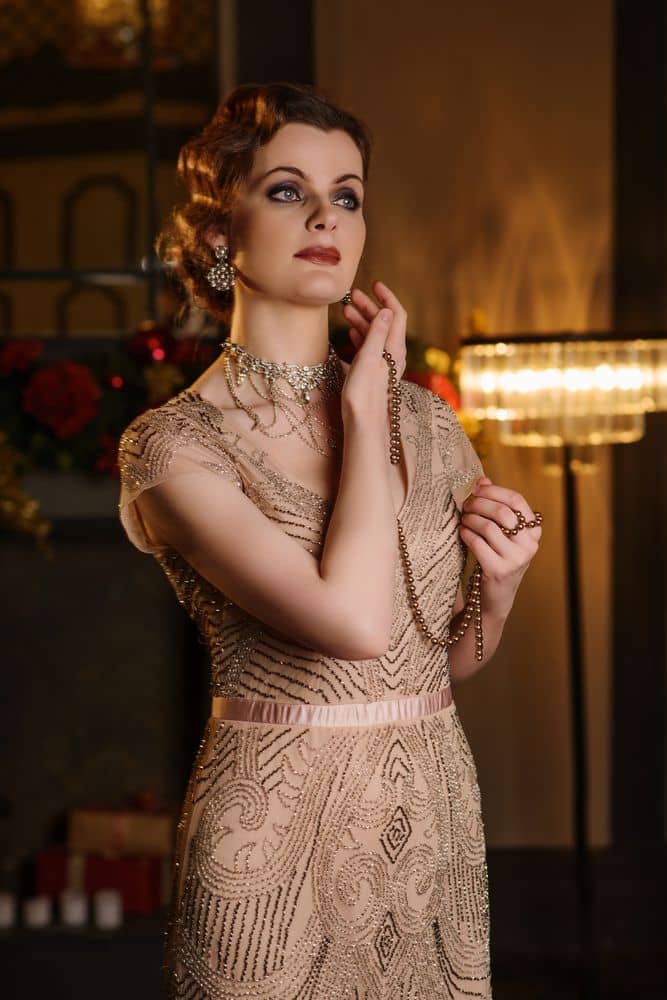 The 30s was the decade of the curl. As women started picking up new and more complex hairstyles, the curl became the centerpiece of the typical 1930’s hairdo. Bathroom cupboards full of hair curlers become an iconic staple in households during this time as women rocked incredibly curly looks. Most hairstyles still never strayed below the nape of the neck though, as longer hair was still not seen as being as glamorous as short hair, or hair that was styled up in a curly bun.

The 1940s saw rise to hairstyles that required substantially longer hair. Curls continued to abound, but also became larger and more swooped into the prominent bouffant hairstyle. The bouffant hairstyles were generally styled tall and poofy on top with locks trailing down the back of the neck. Hair began to be worn as low as the shoulders as well, often styled in a “half up half down” fashion. The pompadour hairstyle was also prevalent at this time, introducing opportunities for women to individualize the way they wore their hair.

Short hair once again saw a major surge in popularity during the 1950s. The bob came back in a major storm, but unlike the first wave of popularity in the 1920s, the hairstyle took on a more diverse selection of styles. Curls were just as popular as before, but the slick wave of the 20s didn’t make a return. The curls of the 50s were more voluminous and light with a more matte and carefree finish. The 1950s also saw the appearance of the Italian hairstyle, with bobs that were fluffed up to be larger and rounder than bobs of decades past. The poodle clip hairstyle was also a homerun, with big round curls focussed on the top of the head being paraded by TV stars like Lucille Ball. 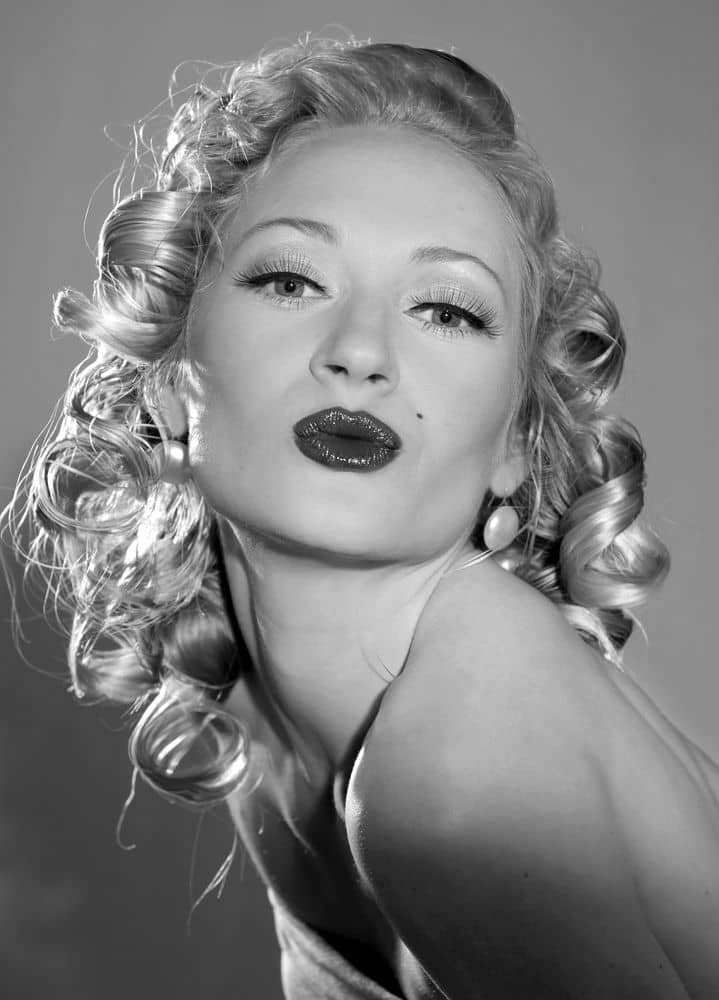 Big? Yes. Bobbed? Yes. Bangs? Yes, the 1960s saw all of these hairstyles! The 60s were a time where women started to branch out into many different looks, many of them including large, curled bangs. Shorter hair was still popular, but hair with extreme volume was an important part to looking stylish. The notorious beehive or “B-52” hairstyle caught mainstream popularity because of the voluminous, off-the-neck style that also allowed for creativity with bangs. Women could pull off many different hairstyles as long as they had curls, bangs, or poof.

The 1970s continued to see an increase in diverse hairstyle choices throughout the decade. Feathered and shag hairstyles were popularized by Farrah Fawcett’s timeless look, while the hippie crowd shunned products and treatments in favor of straight, natural hair. In a similar vein, the black pride movement of the decade brought natural and permed afros into the spotlight, along with traditional plaited cornrows. The wedge was another iconic hairstyle that was brought to mainstream popularity by the 1976 olympic gold medalist ice skater, Dorothy Hamill. The look was created with a steep, triangular shape with lengthier hair on top, and it was an instant hit!

Hairstyling new strides in the 1980s with an obsession with all things big. Big hair, big looks, and big attitudes! The quintessential look of the time included curls, crimps, and lift to look as wild and carefree as possible! In addition to the large locks, looks like the mullet took popularity as well, featuring length in the back and shorter hair on top. Curls and perms continued to be popular throughout the 80s especially the newly invented Jheri Curls, popularized by the king of pop, Michael Jackson. Another prolific look from the 80s was the high ponytail with a scrunchy, which could be worn centered or off to the side to suit the mood.

The 90s are often characterized by a number of eccentric hairstyles from the time, but few were as iconic or lasting as “The Rachel.” Jennifer Aniston inspired millions when she took the stage for the incredibly popular TV show, Friends, as with her bouncy, layered hairstyle. Crimping also survived the 80s and was popular throughout the 90s, especially among younger women. Accessorizing also exploded during the 90s, with everything ranging from butterfly clips to scrunchies that were used to hold up the newly popular “half-up” hairstyle. African-American women of the time also cemented the box braid as a staple hairstyle for decades to come.

Women continued to try out a wide variety of new and interesting hairstyles throughout the 2000s as they had in decades past, which brought a massive array of unique hairstyles into mainstream popularity. One of the most iconic looks of the decade was the stripey or chunky highlights in super straight hair, often paired with clipped back bangs or flat ironed bangs. Layers also dominated the scene from the red carpet to high school hallways, often with flipped out ends for a little extra flair. Hair accessories diminished in popularity, but headbands became more popular than ever as a way to control straight hair.

Over the past decade, we’ve seen many hairstyles go retro with a twist, and sometimes it feels like the “in” fashion changes on a daily basis! You can see all kinds of hairstyles on the red carpet, ranging from crisp, modern bobs to voluminous, layered locks. Advances in color technology has helped to increase the prevalence of new and exciting hair color. Balayage has been the go-to color option for several years, providing a natural, sun-kissed look for the wearer. For the more adventurous, trendy and bold colors come and go, such as the playful cotton candy or the rich and tasteful rose gold. Creative incorporation of braids has also surged due to popular shows like Game of Thrones, which features the look on prominent female characters.

Where Will Hair Go Next?

The past ten years has shown that hair styling and color is limited only by your imagination, and the past 100 years have shown us that the looks of the future will surprise us! Where do you think mainstream hair will go in the next ten years? Share with us on Facebook!

Do you have an interest in leading the next wave of popular hair styles? Becoming a licensed cosmetologist is a great way to get the skills you will need to make the next big hit! Contact us today to learn more about our programs and how they can change your life.