Call Or Text Us Apply Today

Our success as a school lives and dies on our alumni, so this month we wanted to feature an alumni who has made Hair Professional Career College proud! Chad White graduated from Hair Pros more than 25 years ago and has an impressive legacy of experience behind him. We wanted to share his inspiring story with everyone!

Visit Chad’s Instagram to see what he’s been up to lately!

Chad was in college for a nursing program when he discovered his passion for cosmetology. He was working in a nursing home at the time working with elderly patients. It bothered Chad that the residents weren’t groomed or taken care of when they were taken to dinner or other social activities. Their hair wasn’t brushed and they weren’t put together. Chad would take his time to braid hair and make sure the patients looked presentable & felt their best. His coworkers often noticed that Chad had a natural gift for taking care of patients in this way, so when he lost his job at the nursing home, he knew that cosmetology would be the perfect path for him.

Chad wasted little time making a decision about cosmetology school. He reached out to Hair Professionals and decided it was the right place for him. At the time it was the only school in the entire area that offered financial aid and met all of his qualifications, so choosing Hair Pros was a no-brainer! Chad was a young parent of two boys at the time, so financial aid was a huge factor in helping cosmetology school become a reality. Without that help Chad may never have become the beauty professional he is today!

We asked Chad about the things that Hair Pros did that helped him as a professional cosmetologist, and there was one thing that stuck out to him. He said that answers were never given to him in beauty school, he had to search and go on a journey of discovery. If instructors just handed out information, he would not have had the opportunity to learn a lasting lesson and become a better beauty professional. The focus on self-improvement is what helped Chad prepare for a long and successful career as a cosmetologist. 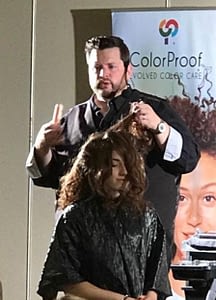 Chad left beauty school with a determination to work hard and learn as much as he could. He worked in a little salon in Illinois. During that time he performed every kind of service you could imagine, from manis and pedis to full hairstyle makeovers. After over four years in that salon, Chad moved to another salon in Illinois where he stayed for over 17 years. After 10 years of hard work, he picked up a new responsibility as an educator for ColorProof and gets the opportunity to teach as a platform artist. This position allows Chad to travel frequently around the country to salons to teach them all of the latest techniques and tricks while also letting him maintain a book of clients.

Chad has also found ways to explore his creative passions by creating wigs for local high school and community theatres. His daughter was cast in the school play ten years ago, so he saw it as an opportunity to get involved and make it better experience for the students. His theatrical wig making and hair styling has only grown over the years as he’s worked on shows such as The Little Mermaid, Rent, Lion King, Grease, Into The Woods, and more. Chad’s wigs are now created and used in shows all around the world!

Now I know we all love @colorproofhair shampoo and conditions, but the secret of our brand is our amazing stylers. All of these pieces were created using @colorproofhair styling and finishing products. Wigs by #wigmakerrulebreaker #wigsofColorProof #ccmusicaltheater

After 17 years of working in the same salon, Chad started providing services out of a booth rental owned by a friend. Things were going well until the building burned to the ground while Chad was on vacation! He started hurriedly calling around until he found a salon that would take him on. After a few months in the new salon, he felt wrong about the way things were managed, and asked the salon partners about ownership, e was able to purchase the salon from them on contract without debt or loans, Within five weeks Chad relocated his new salon and named it Influence Salon, located in Morris, Illinois. The salon recently celebrated its five year anniversary, which is such an incredible success!

When asked about advice he would give to future cosmetologists, Chad had some inspiring words of wisdom to share:

Chad is absolutely right, the most successful cosmetologists are the ones that hustle and work hard. He also mentions the importance of listening to the client and providing what they need:

”Cosmetology is so much more than cutting hair. It touches people and it makes a difference in their lives. It’s powerful for us to have that gift in our hands to make people feel better.”

That opportunity to make a positive change in the lives of so many people is a big reason why people enjoy their careers as cosmetologists. When you talk to Chad you can tell he has a fierce passion for what he does and he means every word of what he says!

Talking to Chad was a special treat for us because it helps us to know that we can prepare people for success and happiness in their lives. If you are interested in pursuing a career where you can help other people, we offer programs in cosmetology, esthetics, and nails for you to choose from. Contact us to learn more about how you can get started!